Leucine.  Isoleucine.  Valine.  These are BCAA's.

BCAA's are essential to building lean muscle.  Think of them as the mortar to bricks.  Protein being bricks of muscle.   Amino acids would be bricks if the protein, in this context, was the house.  Make sense?   So, branch chain amino acids are the essential element to muscle growth - they kind of hold the building all together and spawn new growth.   These 3 are those that you need to pay closest attention to:  leucine, isoleucine and valine.  Look for these on your labels.

Upon digestion of protein, the stomach and intestine breakdown the protein into smaller units.  These units are called amino acids.  The body will then produce proteins that are needed from these digested amino acids.

Amino acids can join  (or chain) together to make thousands of different proteins.  There are multiple types of amino acids. About 500 specific known to man.  Of those there are 22 that are most important to health.  These are called standard or canonical.  Of those 22, 13 can be made by the body.  These are classified as "non-essential".  However, the other 9 are "essential".  And, of those 9 essential amino acids are your 3 BCAA's.  Essential means that your body relies strictly on diet or food consumption to receive them.   Again, of these 9 essential amino acids are the BRANCHED-CHAIN AMINO ACIDS: Leucine, isoleucine and valine.   And, it are these are most conducive in promoting muscle growth.  BCAA consumption also helps in muscle glycogen stores (ie:  glycogen is what you get from a carb supplement like Vitargo).   This table breaks the 22 amino acids down for you:

Amino acids as defined by wikipedia
Remember, amino acids are many.  Its the BCAA's (leucine, Isoleucine and Valine) that you want to pay CLOSE attention to.  Glutamine, arginine and alanine are also commonly supplemented.

Here's a great read on BCAA's :

The branched-chain amino acids, or BCAAs, are the three essential amino acids leucine,isoleucine, and valine. From a chemical structure standpoint, each of these amino acids has a forked outcropping that looks a lot like a branch. That's where they get their name. If they were named for what they do in the body, they would have been called AAAs—for amazing amino acids!

You may have heard that BCAAs help support muscle growth. That's no BS. In fact, a study that I presented at the 2009 Annual Meeting of the International Society of Sports Nutrition found that trained lifters taking a BCAA supplement around workouts for 8 weeks gained about twice as much muscle and strength as those taking a whey protein shake without additional BCAAs.

But the benefits of these three simple acids go far beyond mere muscle growth. Let's get deep into the science of an important performance supplement!

Branch Out to Work Out Longer /// 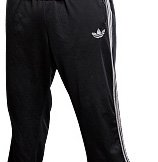 Part of what makes the BCAAs so special is how the body handles them. Typically, when you ingest amino acids—either individually or as a whole protein—they first travel to the liver. Here, the liver either breaks them down to use as fuel or directs them toward building and repairing muscle and other tissues. BCAAs, on the other hand, tend to be spared by the liver and get sent directly to the muscles, so that the muscle can use the BCAAs directly for fuel or to build and repair itself.

This gives BCAAs a two-pronged relevance to athletic training. During workouts, they can act as a fuel source, and when the workout is over, they can help build muscle. These effects explain why instructions on BCAA products usually advocate you take them before, during, and after a workout.

The more intense and the longer your workout, the more BCAAs will be used for fuel. So you can see how taking a dose of BCAAs before workouts can help you sustain your energy during a workout and train with more intensity from start to finish. You may not feel them in the same way as a pre-workout supplement, but first-time users often report that they BCAAs make their workout feel more pleasant and manageable.

Branch Out to Get Bigger and Stronger ///

The BCAAs built their popularity with bodybuilders on the reputation of being able to increase muscle size. But how does this work, exactly?

As you likely know, muscle tissue is made of protein. And protein is made up of amino acids, which are strung together like a pearl necklace. The way that muscle grows is by stringing together amino acids to make more protein. This is known as muscle protein synthesis. Although the three BCAAs are critical components in the "strings" of proteins that make muscle, their role in muscle-building is more than serving as building blocks.

Research has shown that the BCAAs, particularly leucine, increase muscle growth by directly stimulating muscle protein synthesis. Leucine acts like a key that turns on the process that strings the amino acids together to build muscle protein. Additionally, leucine boosts insulin levels. Insulin is an anabolic hormone that further stimulates protein synthesis. 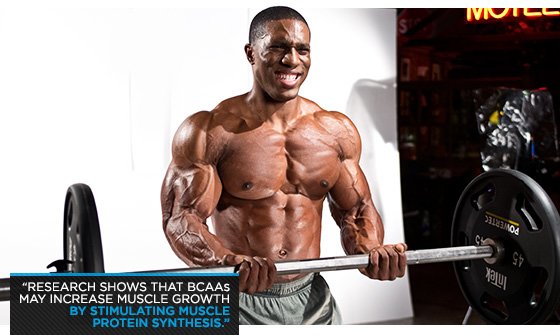 Yet another hormone that BCAAs influence to promote muscle growth and strength gains is cortisol. Research has shown that athletes taking BCAAs have lower levels of cortisol during exercise. This blunting of cortisol levels is thought to increase muscle growth because cortisol encourages muscle breakdown and interferes with the anabolic hormone testosterone. Numerous studies have confirmed that athletes taking BCAAs have significantly less muscle breakdown after exercise and recover more quickly.

Branch Out to Delay Fatigue ///

Acting as a direct energy source for muscles is not the only way that BCAAs boost your workout intensity. They also work via the brain to delay fatigue. 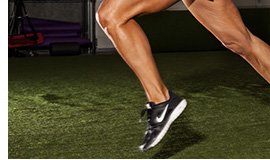 During exercise, the neurotransmitter serotonin (5-HT) signals to the brain that the body is fatigued. This leads to a reduction in muscle strength and endurance. The amino acid tryptophan is responsible for producing 5-HT in the brain, whereas the BCAAs, namely valine, compete with tryptophan for entry into the brain. Research has shown that taking BCAAs before workouts lowers the amount of tryptophan that gets into the brain and therefore delays fatigue.

This ability of BCAAs to delay fatigue via this brain mechanism also means that BCAA supplements aren't just beneficial for the body, but the brain as well. By reducing levels of exercise-induced 5-HT in the brain, you reduce mental fatigue, which keeps you sharper mentally. This is one reason that endurance athletes and other high-intensity competitors supplement with BCAAs: to keep sharp when they're approaching physical exhaustion. Many people sip on BCAAs throughout the work day for the same reason.

BCAAs have also recently been found to aid in a different type of endurance: life span. Researchers from Milan, Italy discovered that mice supplemented with BCAAs in their drinking water had higher amounts of mitochondria in their muscles, higher activity of the longevity gene, SIRT1, and lived 12 percent longer than those not getting BCAA-enriched water. So supplementing with BCAAs daily can keep you in the race longer in addition to making you stronger.

Branch Out for Fat-Loss ///

The BCAAs are clearly great mass-building supplements, but they also can aid in fat-loss. Researchers have yet to determine precisely how this happens, but they've offered up several theories to explain the startling results they've seen.

One of the first studies to discover this benefit was a 1997 study of competitive wrestlers, which found that those who were supplementing with BCAAs while following a low-calorie diet experienced a greater drop in body fat, particularly in the waist, as compared to those taking a placebo. My study from 2009 also found that the lifters taking BCAAs lost about twice as much body fat as those taking whey protein without added BCAAs.

A study out of Brazil found that leucine supplementation for six weeks caused a large drop in body fat. The researchers proposed that the increase in protein synthesis stimulated by leucine increased energy expenditure so much that it helped to burn off body fat. Leucine has also been found to reduce hunger, causing you to eat less while you burn more, which ultimately leads to fat-loss.

In the most recent study on BCAAs fat-loss effects, Japanese researchers discovered that mice given isoleucine while eating a high-fat diet gained significantly less fat than mice not getting supplemental isoleucine. This was due to isoleucine's ability to activate special receptors, known as PPAR, that increase fat-burning and inhibit fat storage.

Each time you take BCAAs you should go with about 5-10 grams. The most critical time to take them is around workouts, so add 5-10 grams to your pre- and post-workout shakes.  Of course, I suggest BCAA DURING or INTRA workout.  BCAA's can and SHOULD also be sipped on during the day.  Even while you site at your desk.

If your goal is to build mass, also consider taking a dose of BCAAs first thing upon waking to help stop the muscle breakdown that is turned on during your night of fasting while you sleep. You can also take a 5-10 gram dose of BCAAs at any other time of day to get a mental energy boost, reduce hunger, and aid muscle growth. 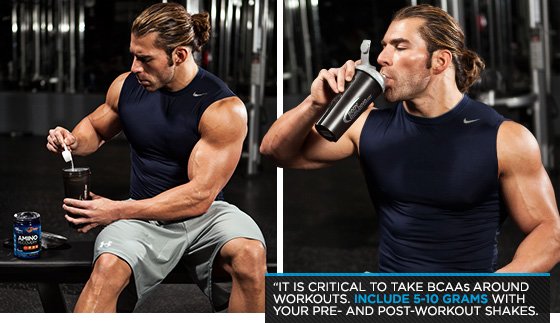 What are some other BCAA's?  Check these out

Activates protein synthesis and increases muscle recovery. Take AMINOCORE during weight training or any athletic event. May also take during non-training days. Yes, you may sip on this at your desk.  Highly recommended.  Again, take during workouts, or anytime you want to decrease muscle breakdown and increase protein synthesis.  Throw in a scoop of Vitargo (unflavored) for best INTRA workout results.

What are some other BCAA's?  Check these out